Please click below to purchase.
Color Coordinated Interior catalogues a little known but characteristic and illuminating early project of Laurie Simmons's, from 1983, just a few years after her first solo show in New York. Simmons is best known for her chilling and sophisticated photographs of dolls and dollhouses--seminal works that can be found in the greatest collections of contemporary art throughout the world, including The Metropolitan Museum of Art and the Guggenheim Museum in New York. Here, Simmons created miniature spaces using projection and illusion rather than glue-and-board craft, casting photographs behind dolls and lighting her tiny models starkly with flashlights--they're "Teenettes," three-inch-high Japanese figures whose clothes and hairstyles are all molded from the same single piece of brightly-colored plastic. The Teenettes' features are fuzzy by nature, but the scenes behind them here are photographed so that piping on every pillow pops out. This guided tour, with an interview by California artist James Welling, puts this newly collected work in context. Biography:Born in Long Island, New York (1949), Simmons lives and works in New York City. She graduated with a BFA from the Tyler School of Art in Philadelphia and has since been the recipient of a National Endowment for the Arts Grant (1984) and the Roy Lichtenstein Residency in Visual Arts at The American Academy in Rome (2005). Her major film "The Music of Regret" debuted at the Museum of Modern Art, New York in May 2006 and other examples of her work can be found in numerous internationally recognized museum collections including: Metropolitan Museum of Art, New York; Musée d'Art Contemporain, Montreal; Museum of Contemporary Art, Los Angeles, California; Museum of Fine Arts, Houston, Texas; Solomon R. Guggenheim Museum, New York; St. Louis Art Museum; Stedelijk Museum, Amsterdam; The Birmingham Museum of Art; The Corcoran Gallery of Art, Washington, D.C; The Hara Museum, Tokyo. 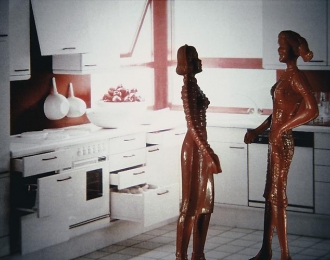